I know the calendar has May as a full month – but I can say with all certainty that the last time I looked at the calendar and processed the date, it was May 6.

And here we are now in the last full week of the month.

In a nutshell – life in Boweryville exploded about two weeks ago. The Big Guy’s mother passed away. While it was not unexpected, it was sudden. We knew her end was in sight, but certainly not within days. He and I found ourselves in the position of aiding his father through the demanding and emotional pitfalls that planning a funeral can be.

Throughout this experience, I found myself faced with huge ironies that I would like to share – in no particular order.

1. People forget who the funeral is for. Firstly, the deceased and secondly, the surviving spouse or offspring. Any decision that we were faced with making was filtered this way – Would she have wanted this? Does my Father-in-Law want this? Does TBG or his brother want this? Anyone outside of that pecking order was simply not considered. There was a person or two who would make comments about decisions that were made – and I would refer to the Pecking Order. I don’t think you have to apologize for that.

3. There have been many times in my life as a Mother that I have been proud of my children, but never more so that during the day of visitation and the next day at the funeral. My boys stood and shook hands with hundreds of people they didn’t know. They watched people react emotionally and they handled themselves brilliantly. My heart swelled when I was paid a very sincere compliment from someone who appreciated how well the boys conducted themselves. They made eye contact, they smiled when appropriate, they answered questions – usually the same ones – sincerely and politely, for hours. While it made my heart full to see them do that, it nearly made me burst with pride when someone else actually noticed it too.

4. Have I mentioned yet that people are inconsiderate? One person who came to pay his respects actually said to my boys “Well, you’d better get used to being in this line-up because with the age of the people around you, you’re going to be doing this a lot more often!” While First Born Son and Second Born Son were busy picking their chins off the floor, I wondered to myself what his ride home was going to be like – as his wife looked ready to put him in a box herself!

5. For all the times people have thought us crazy for buying shirts, ties and suits for our kids, it totally pays off at a time like this. Second Born Son is not naturally drawn to the button shirt and tie like his brother is. But when I advised he would be wearing a tie for two days – as well as his suit for the funeral, he merely nodded – he knew it was not only proper, but required. I loved him even more for it.

6. A part II to that thought….we realized that we needed to buy SBS shoes – and ended up getting him a pair of MENS SIZE 7 DRESS SHOES. I’m in distress over this! My baby is wearing MENS SHOES! The only thing that saved my breaking heart was his humor. When presented with several Oxford styles as well as a pair of more on-trend slip ons, he replied “I don’t care what dress shoes look like, as long as they are comfortable. I only care what my running shoes look like.” Good to have your priorities Little Man!

7. You truly find out who your friends are in times like this. People you would never anticipate hearing from will show up at your door with a pie, cheese tray or other gesture of kindness. This gives you faith in humanity, not to mention about 10 extra pounds. I think I have to avoid lasagna and funeral sandwiches for a couple of weeks.

8. Regret is a useless emotion. The first time I heard it was in college, but this saying has become my motto. I want to live my life without regret, and I feel,  so far, I’ve done well. Throughout this experience I’ve had a front row seat to actions and consequences regarding regret. Death always wins – none of us gets out of here alive, so you might as well make your choices and actions so you go in a direction without regret.

9. Not every death is a bad thing. When you see someone will not improve, and you know there is suffering involved – all you want for them is peace. If death brings peace, so be it. The living are there to console each other.

10. I need to give some serious thought to my final wishes. I cannot imagine giving my husband, children and parents the chore of planning and imagining my needs and wants. The pain one goes through to create a sendoff their loved one would like is heart wrenching. No one should have to go through that.

Just a quick blurb to let you know that priorities have shifted for the next couple of days and I won’t be able to post anything meaningful for a day or two. Bear with me, won’t you?

I am the first to admit, I’ve had a blessed life. Sure, I’ve experienced disappointment and frustration, but I’ve managed to avoid the type of sorrow that leaves an ache in your heart.

I’ve mentioned before about the special connection The Big Guy and I have with The Farm. We’ve put The Farm in the middle of our world, from being the first place we took our children to after we brought them home from the hospital, to taking the liberty of enjoying the view, history and even equipment. It is where we met and we had dreams of one day making it our home. This was not to be.

Saturday was the auction. Generations of possessions were sold to the highest bidder. There was an erryness to the exercise, watching bobsleds and snowshoes being snapped up by strangers who would no doubt dust them off and mount them in their own homes, or God Forbid, in a restaurant somewhere. Claiming this family’s history as their own – it seems so false.

For me, already tightly wound emotionally and apprehensive for my three “boys”, it seemed the comments made by some strangers were too painful to bear.

“What are you looking for Fred?”

“Nothin’, I just had to come and check this out. This is history you know. It’s a Century Farm. Can you believe that? The family is just letting it go?”

I grit my teeth and keep walking.

“Look at that house, it’s something else. I can’t imagine letting something like that fall out of the family.”

But the worst were the most pointed comments. One directed right at me.

“Hey, Sarah! Why didn’t you and The Big Guy buy The Farm?”

The urge to become physical was difficult to overcome. I must confess – I was not classy about my response, but suffice it to say I cleared the air regarding the fact. Sometimes pain cannot be contained. It surfaced once again later in the day, as First Born Son did us proud and was hoisting his family’s artifacts for bidding. A couple beside me began a conversation about the boy in the green shirt.

“Look at him, isn’t that sad?” said the First Ignorant Person.

“Who? The kid with the green shirt?” said the Second Ignorant Person.

FIP – “Yes, look at him up there, you can just tell he loves being here.”

FIP – “It’s too bad he’ll never be able to have this place. Can’t imagine.”

Pissed off Mother – “Are you talking about the kid with the green shirt?”

The look on my face, and the tone of my voice, shut the conversation down.

My pride of FBS was matched by that for Second Born Son. While he was given the boring and then frantic job of directing traffic, he was then appointed the task of running bid sheets from the auction site back to the trailer where the clerk would reconcile the amounts bid against the funds paid. He did such a good job that the man who was recording the bids and giving them to SBS said in all the auctions he’s done, he’s never had such a young man do such a good job. He even made a point of stopping before he left to compliment The Big Guy and myself. We had every reason to feel proud.

That pride resurged when Uncle B gave FBS the keys to the Massey Ferguson and the John Deere. The auctioneer needed each tractor started to demonstrate that they were in sound shape. FBS was the last member of our family to start those tractors. When the auction ended and the new owners were claiming their purchases, FBS stood by the tractors, helping them with small details and then standing forlornly as each one drove away. The sight of him standing there, watching those tractors leave will haunt me, such was the expression on his face. 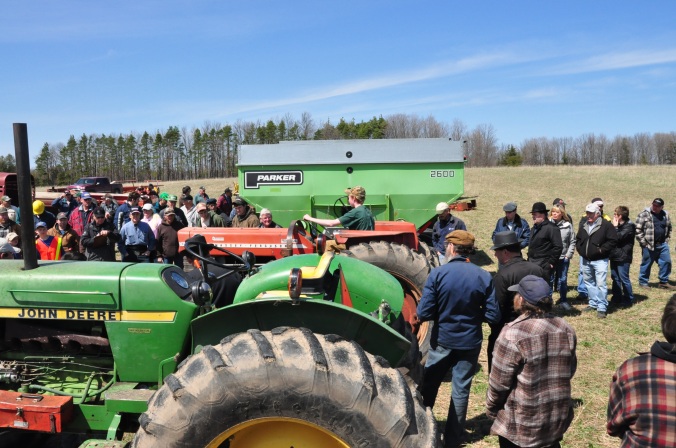 I have taken well over 1000 photos of the farm to document a place that has a special place in our hearts. I want to have something for us to look at later, and perhaps show future generations. Mostly, I don’t want the boys memories to dim.

Because we didn’t want to leave that day – afraid of what leaving would mean, I asked Second Born Son if he wanted to take some more pictures of his favorite place, the hay mow. Many adventures have been lived in this mow. It’s the place SBS asks to go to every time we are at The Farm. Now most of the bales are gone, but a handful remained, and with the sun sinking lower in the Western sky, it was a perfect opportunity to shoot something special that would mean something to him.

And while I hope this photo brings him joy, I can’t help but feel The Ache getting even stronger.

This post is going live early May 2, 2011. The Farm will officially be sold today.