This time of year I like to get caught up on cleaning and organizing. After all, it’s not like I want to be outside! 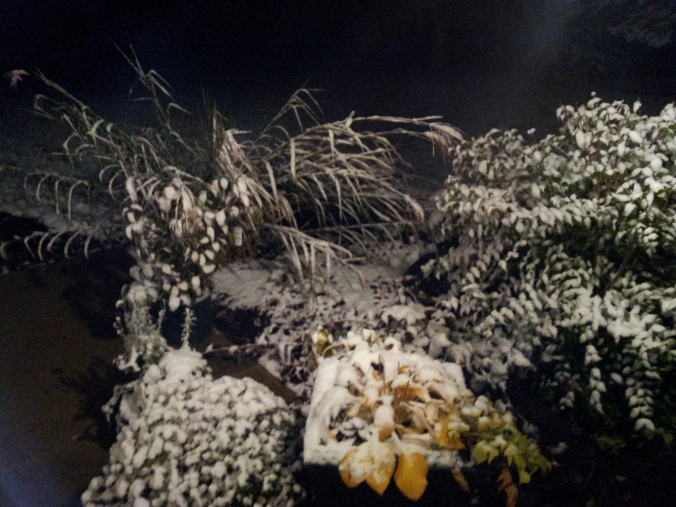 I’m SO glad I found THIS! This is what I’m going to be looking for a year from now. It will be the key component to some electronic device that I cannot name at this time because it’s not obvious (at least to me) what it is used for.

Then I found these…

Now, I’ve wanted to call people “knobs” before, but now I can actually hand one to them and say “Here knob!” Again, very sturdy and appear to be key in whatever their original function may be. If only I knew what that was. 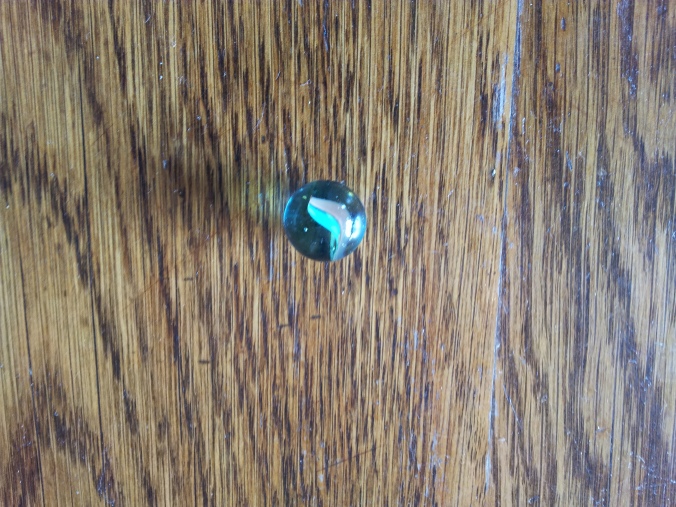 Finally – I was RELIEVED to have found this. Some of you know I’ve lost a couple, and I’m sure I’ll need to find a couple more, but for now, I have one more than I had the day before, so I’m grateful.

Then it was time to move on to cleaning. I’m a bit of a masochist in that I don’t mind that the dogs are in the house. This time of year, it’s brutal though since we literally had two inches of snow yesterday, and today I have two+ acres of mud for them to track inside. Sweeping daily is a necessity because, well, they are Shepherds and that’s how we roll, unless we want to be crushed by tumbleweeds of dog hair the size of compact cars.

I was really frustrated this past week because I was trying to solve an issue. How were paw prints getting on the cupboards, the fridge freezer and the sliding glass doors? It’s not like Roman and Cane are working on Ninja tactics.

Then, I noticed a pattern… 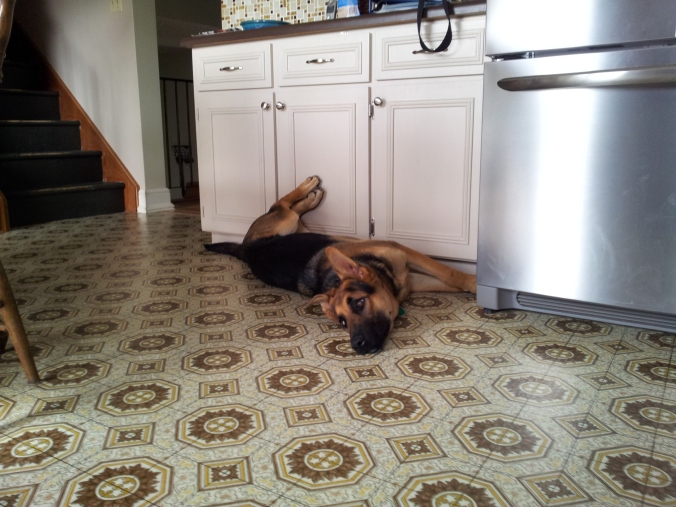 CAN YOU SEE THE SMUDGES ON THE FREEZER DOOR? AAARRGGHH 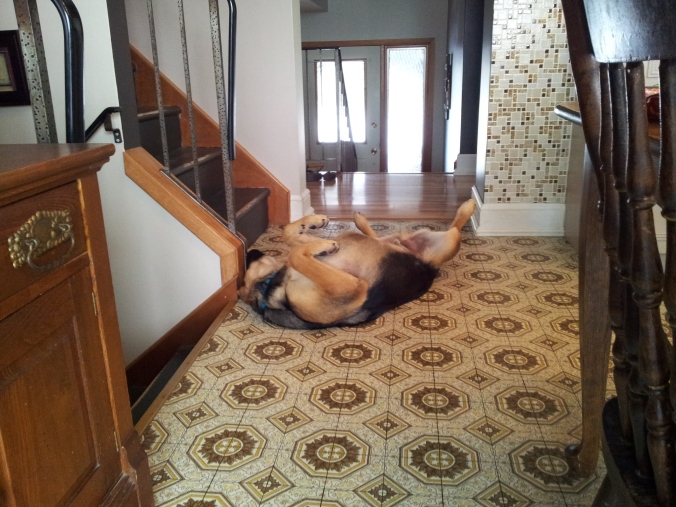 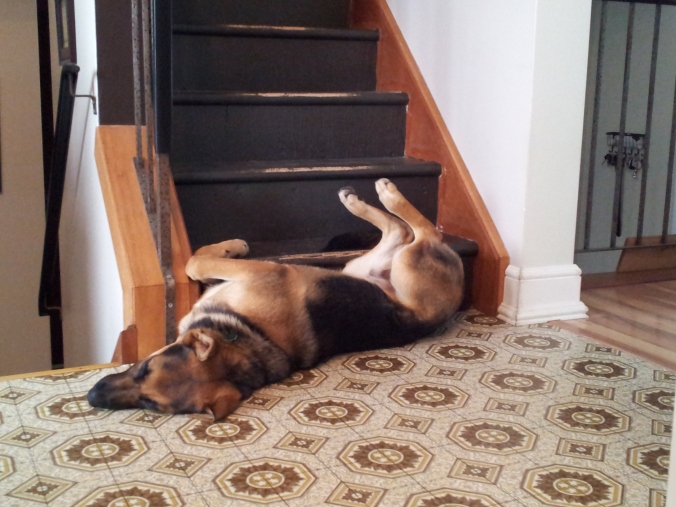 And the mystery was solved. 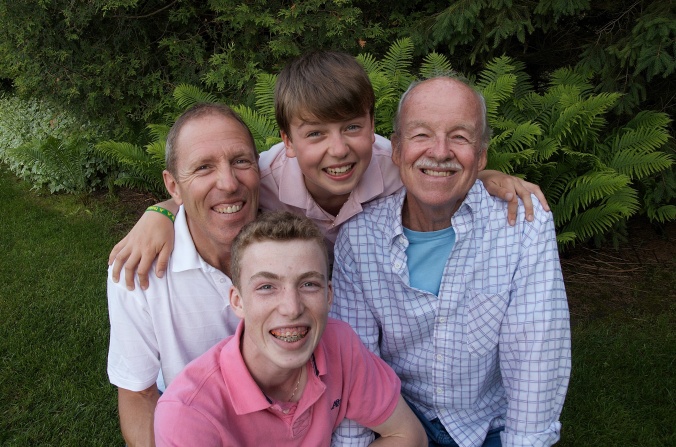 I am surrounded by Testosterone. Even the dogs are both male.

As one of two daughters, it was extremely enlightening for me to become a mother of two sons. Once the initial shock wore off, I vowed to be the most enlightened and supportive mother I could be. But the male/female dynamic continues to intrigue me.

Take, for example, the roles The Big Guy and I have. We aren’t exactly “traditional” in all aspects of our relationship. He has been very supportive of me showing our sons the range of abilities woman have and how there is no difference when it comes how to treat people, what to expect from people and what people can expect of themselves. Not “men” vs “women”.

However, I have noticed a bit of a disturbing trend. Studies (I don’t have to link them – Google has MILLIONS of links – see you in 50 years) that bring to light a change in the roles we play and why. Women (girls) have been encouraged to go out and be “more”, do “more”, have “more”. That there is no limit to what they can do, and thanks to the Women’s Movement, we have the ability to do everything a man can do.

But what about our boys? What support have we given them in the evolving world of relationships and dynamics?

Now some of what I’m going to say is going to SOUND like I’m anti-female. For the record, I’m not, and since I kinda am  A GIRL, I think I get to say this without any judgement, but perhaps with a little perspective. Follow through before freaking out, ok?

Today, girls are having, on average, 75 sexual partners throughout their highschool careers. Consequently, this means the boys are in the same camp – but follow along. This is a huge increase from 10 years ago, and unheard of a generation ago. The difference today is that girls feel more in control of their sexuality, and while we could debate the reasoning behind WHY a young person is so sexually active at such a young age, I really don’t have time for a Thesis today – got laundry to do.

The trend is not that males are necessarily pursuing females, it’s that females are initiating these encounters on an increasing scale. Traditionally males were the pursuers, now females are the ones reaching out.

This is at the same time where females are entering post secondary education and subsequently the workforce in larger numbers than ever (although we still have to figure out how to make as much as man for the same work, right ladies??) and some would point to selective hiring for minorities as to why that is happening. I like to think it’s because the job is going to the most qualified person – after all, isn’t that what our mothers/grandmothers fought for? Equality? Women are becoming more successful in their careers and pushing of relationships, marriage and family longer and longer.

What are our guys doing?

There are TV franchises built around the premise of the son come back home to nest when he should be soaring because he’s not out making it in the world – because it’s become common within our society.

Women are being challenged to be all they can be. Conquer the World!

Men are the punchline on Wednesday nights.

There was a phone call at our house the other day.

“Is Second Born Son there?” asked the young female voice.

I advised SBS that he had a message from an unknown source. He wasn’t impressed. If you remember, this has happened to him before, albeit a little more aggressively.

We returned from a week-long vacation to be greeted by another young girl (we’re talking Grade 4 here people) first asking SBS to call her, then demanding that he call her, and finally berating him for NOT calling her, over the course of four or five messages. BTW – she never left her number.

This time, as in the time previous, SBS was HORRIFIED. A girl had CALLED HIM!? What’s up with THAT? (Remember here that as a household with less than traditional roles, we have not stipulated that ONLY BOYS CALL GIRLS.) He immediately sourced out the “offending” caller at school and reported to me the following day. We talked at length about why it bothered him that she (and apparently an entire room full of friends on a sleep over) decided to ring him up.

What I learned was that he felt he should be the one calling the girl. Now, society has that stereotype out there, but I could also see how this was ingrained in him. It bothered him, beyond what other people thought. This is a kid who was not overly concerned about being popular, and more about being true to himself.

He didn’t know how to be himself if someone else was taking on a role he thought was his.

And that, my friends, is when the light bulb went on for me.

If we are going to empower girls to go higher, faster, farther, then we better be prepared to equally support our boys to understand how to navigate these changes and empower them as well. SBS and I talked about how he may not be comfortable with a girl calling him, but maybe she has the confidence to pick up the phone first. After all, I would think most men would agree, calling a woman for the first time can be an unnerving experience. Less feeling threatened, more feeling flattered. When he’s old enough, we can work through how he can feel better about his role in a relationship, but DEAR GAWD, HE’S ONLY IN GRADE 8!! Maybe next week?

Overall, men aren’t understanding the new dynamic in male/female relationships (let’s be honest – I don’t think they had the “old” dynamic figured out either…) and this was impacting feelings of inadequacy which in turn leaves women feeling like men are not “bringing it” to relationships.

The biggest complaint of dating women who are in the 20s-30s is that Chilvary is dead. Romance is gone from dating. BUT, how many times can a guy hear that his date is more than capable of paying her own way THANKYOUVERYMUCH, or that some “loser” held the door open for her, or heaven forbid – he brought FLOWERS , before he stops making these gestures that he thought made her feel special. You can’t bemoan the Death of Romance while you hold the smoking gun.

If I don’t need you for an income and I don’t need a relationship for sex, and I’m only considered successful if I conquer the world on my own, then really what do I need you for again? Not. Good. For either side.  As women are discovering their own worth, we need to remember the value men bring, before we have a generation of guys who don’t know how to date, never mind be romantic, supportive and empowering of their partner. It’s about give and take. Balance. Equality.

To me, Feminism isn’t the ability to trod upon a man’s sense of self-worth, it’s the ability to enjoy and explore my own. Women can be free to express, experience, succeed and fail.

And so can Men. It shouldn’t be a stigma for a male to be successful, or want to take charge, or want to take care of someone or be the one to pick up the phone first. We need to show our boys that while we are celebrating our daughters, our sons are not over looked.