Dear Republican Party/Voters of the United States of America,

As a Canadian and a rational, somewhat intelligent person (I did put on blue socks with black pants today, but otherwise…), I want to kindly, gently, and firmly talk to you about an unhealthy relationship you are in right now…

We stood back when he first came on the scene with designs on you. We understood he was going to come at you hard, with the goal being your “#1” especially with such a large field of potential suitors. To a certain degree, one could see the initial attraction; money, celebrity (which, although it’s not OUR thing, we know you get sweaty palms over fame), and charisma – of a fashion.

We gave him a chance to win us over. We saw how he was peacocking and showing you how “in charge” he was. He’d go on and on about how he could show you how things could be GREAT again, even though things seem really good for you right now – especially after you broke it off with Bush  2.0.  Even then, we had our doubts about Trump, and hoped you would keep him in the friend zone.

<PAUSE>
Truthfully, it’s 9 months from the Presidential election. We don’t need you making a BIG mistake right now that will make you feel like you need to “seal the deal” with Trump. Please make sure you are taking all the necessary precautions!!!
<PLAY>

We are your BEST friend. We’ve lived beside you our WHOLE LIVES. We want the best for you. We want to get along with your “special” person. Right now, Trump thinks what’s best for you is a wall between us. What the hell did we do to deserve that? I realize this is a small slight compared to the asinine slams he has leveled against (including, but not limited to, as this list grows daily): Mexicans, Women, Muslims, African-Amercians, Megyn Kelly, fellow Republican candidates, John McCain, wait, I’m running out of time on this…..

Really, we question why you are interested in him in the first place, aside from the aforementioned glitz. The guy is, at the very least, a misogynist. I shake my head when I realize that this is a man who has not one but three “Mrs. Trumps” on his roster, not to mention two daughters. We think he knows how good he’ll have it when he’s with you. You have a lot more to offer him, than he does you.

Remember, you are judged by the company you keep, and Trump is on the record as praising Vladimir Putin. Putin, the bully and egomaniac of Eastern Europe, then gave Trump a verbal high five by saying he is a great man. This is not comforting to us!

Maybe you think he’s harmless and you are just stringing him along because his insane rants amuse you. I don’t think this is a game of Chicken that you want to engage in. Time is ticking and the longer you keep this moron around, the more you will get used to his crap! And don’t think we haven’t notice that his favorite word is “stupid”. Coincidence?

Perhaps your infatuation with this clown’s wealth (his corporations have declared bankruptcy, if may you recall) is clouding your judgement. Maybe you don’t see what the rest of us (read here: THE WORLD) sees? Trump is the loudmouth guy at every party, who is obnoxious before he gets drunk and is intolerable once he is inebriated. He’s not smart or even clever, as he blathers on about being so popular that he could shoot someone in plain sight and get away with it!?! He picks fights with unsuspecting guests, tells outrageous stories, then he defies anyone to question him, refuses to be accountable for his actions even when he’s caught red-handed,  and he will NEVER apologize because he is NEVER wrong. Just ask him! He is basically pissing off all of your friends. Remember Britain? Remember how it took you so long to get to a good place after that whole Independence thing?! Well, if you hook up with Trump, he’s not exactly welcome in England! What does that tell you?

If you give him a chance with you, what do you think life will be like? Personal jets and badly decorated boudoirs? Oprah, or Dr. Phil, or Dr. Oz, or Dr. Zeus said, “When people show you who they are – believe them.” He’s showing you who he is. It ain’t good. You won’t change Trump. He won’t get better. If anything, he’ll get worse once he’s “The One.”

Please understand USA, we are not judging you. We too have been in our share of unhealthy relationships. Hell, we just got out of one ourselves. (We don’t like talking about Stephen Harper, but for the purpose of helping you avoid such a disastrous mistake, we’ll make an exception.) We know you deserve better. You deserve someone who will let you shine on the world stage. Someone who values you and isn’t looking to further their own life ambitions. Someone you won’t be embarrassed to leave alone at a family gathering. You aren’t a career move, you are the self proclaimed Greatest Country In the Free World, mainly because we don’t want to argue with you over THAT. (Although we all know the truth now, don’t we?)

Call it of now. Save yourself (and us) the heartache.

I’ve gotta tell you, it’s awesome to hear from people who read The Bowery Girl and ask “So, how’s the reno going?” I can’t say that I thought my mother was the only person reading the blog, as she has yet to succumb to an internet connection, so it’s rewarding to hear from you. Thank you.

Writing about the renovation means I can refrain from losing my MIND over the Jian Gomeshi trail. I am literally taking notes on stuff I want to rant about following the verdict in March. So there you go – mark that on your calendar. Something to look forward to.

As far as answering that reno question, well, it’s going. The Big Guy is an absolute workhorse on this project; after long days at work, he’s putting in late nights on the dry walling in the bathroom and the hallway.

**Editor’s Note** TBG says he hates it when I post photos of him while he’s working, because he doesn’t like what he’s wearing. I advised him that when I change The Bowery Girl’s direction to a more fashion-forward theme, I’ll let him know. Until then, I’ll continue posting working man shots. Keeping it real here!

I am excited about an unexpected detail – we (I) decided to install transoms above the bathroom and the Master Bedroom doorways. Since the house was built in the early 80s, the only item of architectural interest is seizure inducing flooring. No, I’m not showing you that. You’d have to sign a waiver first.

I found a local glass installer who had some remnants from his stained glass days and for a sweet price, we were able to get two panels of “Hammered Flemmish” glass. I’m sorry, every time I say that I think of an intoxicated Belgian and it makes me laugh. Originally he had two other samples for me to look at. I had picked one, and was on my way out when I saw this pattern on a larger piece of glass and hit the brakes. He would sell it to me, he said, but cautioned that it was his last piece and if it shattered when he cut, or when TBG installed it, we’d have to look at a new pattern. He’s not getting any more Hammered Flemmish. (Sorry, giggling.)

<PAUSE> If you really want to go down a rabbit hole, look up glass patterns. It will truly devour and afternoon for you. Start with “Pinhead Glass” and we’ll see you sometime next week. You are welcome. <PLAY>

No pressure on TBG when he received the finished pieces. No anxiety when the glass installer cautioned him AGAIN when TBG asked for advice on how to build a custom frame.

But the results are terrific. I knew he could do it!! 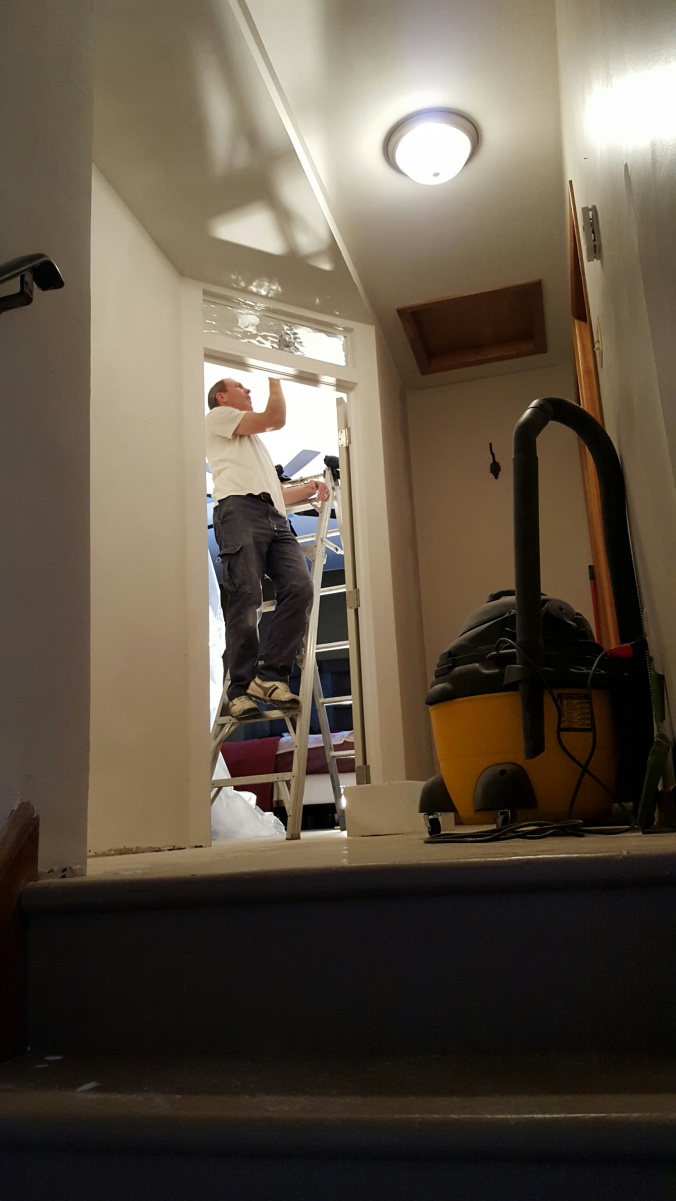 I love how the light throws a pattern onto the ceiling. TBG does his own drywall work, and because we hate ourselves, we’ve incorporated odd angles all over the place. I’d like you to take a moment to appreciate the corners. They are awesome. That is all.

You might say, “Sarah, what are YOU doing to help with this project?” and I would reply, “Gentle Reader, I am FEEDING the man who is doing the work AND keeping his work clothes clean and at the ready.” Then I would add, “I am also the designer/visionist who brings exciting, yet time-consuming and stressful design elements for TBG to execute! I am also the head cheerleader and task master! That’s not NOTHING you know!”

The truth is, TBG is a perfectionist. The only thing I’m allowed to consider helping with is the painting. I’m pretty sure I’m going to have to successfully complete a practical exam before I’m allowed to pick up brush on this project.

So, that’s all for now. Drywall is primed and we are looking to paint this week. Then flooring. Then vanity. Then toilet. Then I’m going to have the world’s longest spa day in this bathroom.

After The Big Guy of course!