It’s day 15,641 of the never ending U.S. election, and the reason I’ve not been more vocal is; a) I feel there are far too many people spouting garbage disguised as knowledge, b) if I start being vocal, I just might never stop.

With this in mind, and being that this is the eve of the election, I’m allowing myself ONE opportunity to write on this topic. ONE. UNE. UNO. 1. And I think you may be surprised.

At first I thought it was an “Emperor’s New Clothes” situation, where everyone could see what I saw, but was just too darn polite to say anything. I then realized, no, there are actually people who are drinking the Kool Aid here.

It became mildly amusing watching what appeared to be a reality show on Meth. New revelations. New scandals. New excuses.

That’s when it occurred to me. This is the ultimate reality show, with the entire American population as contestants. These two candidates are merely ratings props, but the fallout will have very real implications. As resident of the nation to the North, I recall the classic saying, “When the U.S. has a cold, Canada sneezes.” We have a lot riding on this election too.

I have family and friends who live in America. I’m very worried about what this election means for them. Regardless of who wins, there will be a large segment of the population who will be up in arms; some of whom have threatened to take up arms. I can’t image what it must feel like not to know what you future holds. What your country will become.

I feel it is just too easy to tear apart the candidates. Saturday Night Live has political satire covered. I just hope we can all live with the outcome.

On a lighter note, Second Born Son decided to go as one of the candidates for Halloween. I’ll let you decide which one…. 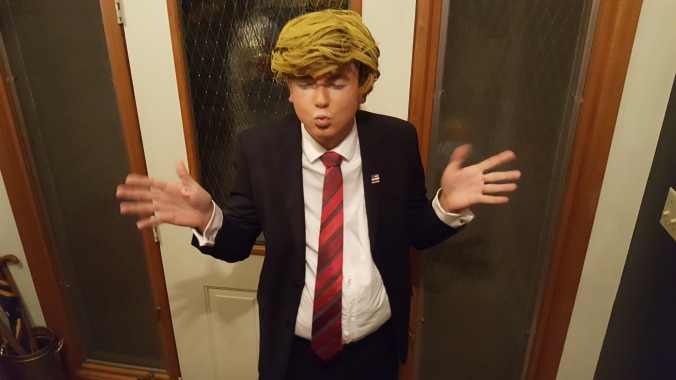 Yes, I had nightmares!