Anyone who has read The Bowery Girl for any length of time knows that we really like Christmas and take our decorating rather seriously.

We told him it would put hair on his chest! 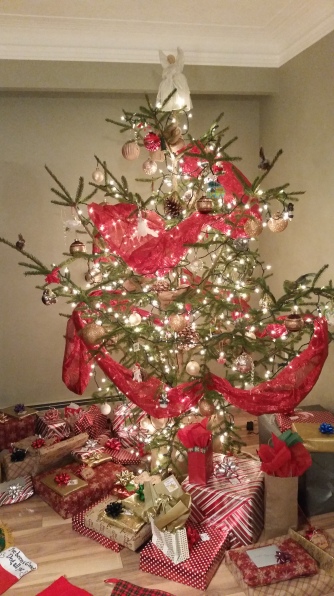 The purdiest tree you ever dun seen!

And we aren’t above risking life and limb to get the “perfect” tree! 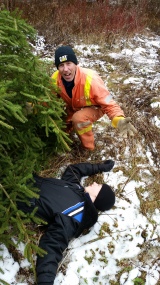 And he tells me he’s on the Health and Safety Committee at work! 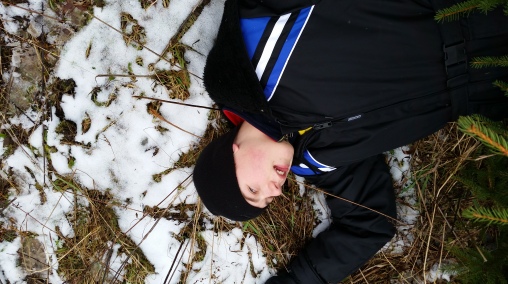 It has involved going out into the wild yonder with a saw in hand. Then there was the task of getting it into the house.

But this year’s tree was truly unique. As Little Sister now lives at my parents’ former home, we didn’t think it would be cool to hike back and steal a tree. We’ll let them get their boxes unpacked before we start helping ourselves. You know, manners.

So we went to the neighbours of my parents’/my sister and brother in law, who, ironically, own and operate and Christmas tree farm. I’ll let you think about that. Yes, we have been slogging trees out of various bush areas for the past several years when we could have simply selected a pre-cut tree while sipping hot chocolate and cider under twinkle lights while being serenaded by festive music.

Yup. That’s how we do things around here. The hard way.

Which takes us back around to this year’s tree. Once again, we needed the “perfect” tree. Something that had the ability to inspire the Christmas Spirit even in the most jaded of Grinch-like hearts. It needed to be the one thing that people remembered about The Bowery Girl Christmas, because, once again, we were hosting at least one side of the family.

Yes, we were asking A LOT of one tree.

So when I came upon a stunning blue spruce, full and lush and standing well over 7 ft tall, I   knew I was in love. The Big Guy questioned whether or not it was too tall. I think he forgot about this tree… 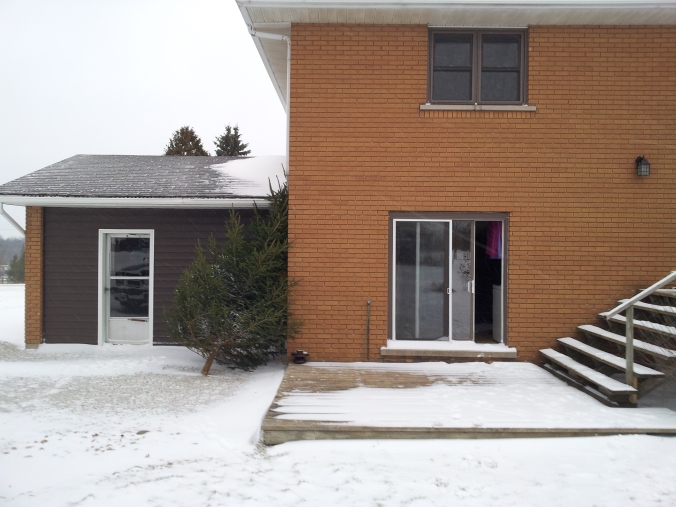 To be clear, that tree is above the eavestrough.

First Bon Son was not nearly as convinced.

“I don’t like it,” he declared, no particular reason given.

Second Born Son was more accommodating. He gave it his blessing.

To appease everyone, we purchased a smaller, Charlie Brown-like tree in a pot that we can plant in the spring. The boys agreed they would put one single decoration on the tree, although I did lend them a star and some garland so it didn’t look so naked.

After the appropriate pruning and trunk trimming, the blue spruce was in the corner of the living room awaiting embellishment. I was particularly excited because TBG agreed to a new colour scheme for our Christmas decor. Instead of the red, green and gold we had used for the past 22 Christmases, this year we would go gold, silver, white and rustic – burlap bows and pine cones.

FBS left before the decorating began, declaring that he had contributed enough to the family tradition. It was his silent protest since he still didn’t approve of a perfectly beautiful blue spruce.

This left SBS and TBG to help put the new decorations on the tree. I strung the new ornaments and the two of them placed them on the tree. When it was done, it was stunning. 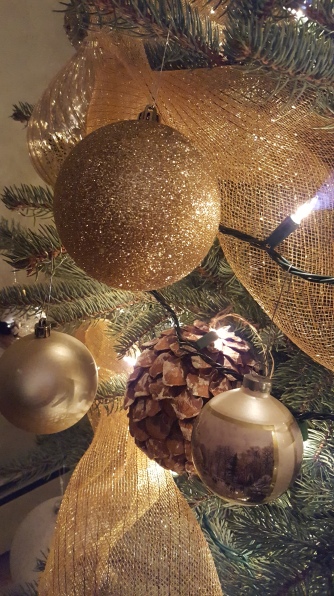 Breathtaking, wouldn’t you agree? The colour and textures were spot-on. We wrapped up the Sunday evening in our jammies, admiring the afternoon of work we had put in. I take a photo and text it to FBS, who is back at college. He begrudgingly admits it looks good.

TBG decided he was ready for the nest around 10:30 p.m. and, as every good owner of a real Christmas tree knows, he unplugged the lights. While he was under the tree, the festive masterpiece went from a 90 degree angle to a 45 degree angle, only saved from further horizontalness by the black leather love seat that broke it’s fall. This sudden stop, however, launched the brand new glittered star from the back corner of the living room, clear across to the opposite end of the space. The TV dogged a bullet…as it were. A third of the ornaments were on the floor. Of those, half were broken. We could tell because the shards were floating across the hardwood laminate floor in the water that had been in the stone filled bucket we were using to anchor the tree.

TBG swore, jumped up, grabbed the tree and yanked it upright. It fell over. He swore again. More broken ornaments. More ornaments the floor. 98% of the water is now creating a tsunami across the living room. TBG said all the words. ALL of them.

SBS launched from the couch and grabbed dry towel in our house. Unfortunately, due to an old war wound, my back prevented me from doing anything other than holding the tree, which seemed to be incapable of staying vertical.

Upon inspection, it became clear that the tree was rather off balance. Almost all of the ornaments are on the front side of the tree. When TBG unplugged the lights, he disengaged the only thing keeping that thing upright.

SBS is moping the floor like he’s getting paid. I’m trying to evaluate how many ornaments have been lost, how many I can salvage and how many are still on the tree, when TBG turns to me and asks to hold the tree. I oblige. HE SHAKES THE TREE. FOUR MORE ORNAMENTS FALL ON THE FLOOR AND SHATTER.

I look at him in disbelief.

Without missing a beat he replies, “I wanted to see if the trunk shifted in the bucket.”

I shoot him the death stare.

It took another half an hour to get everything picked up, the floor mopped up and the dehumidifier strategically placed in the middle of the room. Ever my son, SBS made the perfect observation.

“You know, it could be worse,” he said, “this could have happened at 3 in the morning and we might not have heard and woke up to the tree on the floor and the floor would have been ruined.”

So proud. He was absolutely right. Except his father begged to differ. He was heading back to the shower in an attempt to de-adhese himself of all the sap on every square inch of him. TBG is in the pit of despair. It’s like someone gave him a lump of coal after telling him that  there was no Santa Claus. And that he’s allergic to chocolate. And there’s no gravy for Christmas dinner. It was THAT BAD.

Which I understand, because the tree is a sad shadow of it’s former self.

You thought I was exaggerating, didn’t you. I sent this photo to FBS. He texts back, “I told you there was something wrong with that tree.” He’s lucky he’s an hour away.

Back on the home front, we have glitter in the floor, in the loveseat, in parts of our bodies that we didn’t realize were exposed to glitter. I’m fairly certain I’ve eaten more than a peck of glitter.

TBG’s foul mood continued once he was re-bathed and tucked into bed. He relived the moment over and over again. Ranted about how upsetting the incident was. How his ENTIRE CHRISTMAS WAS RUINED!

<PAUSE> Not kidding. He said that. You should note, he’s weeks away from his 50th birthday. Not 5. Forty nine. <PLAY>

Throughout this so-called Christmas Catastrophe, I’ve been the voice of calm. THIS is when I finally lose it.

“SHUT UP! I’m the one who picked and bought the ornaments. I’m the one who will have to replace the old ones. I never yelled or blamed you for making it front heavy. SBS is absolutely right; we could have found it in the morning and the floor would have been ruined!”

“Well,” he said, “we won’t know about the floor until the morning.”

I take a fist and drive it into his stomach.

I then remind him about the real trees we had before having kids when we were at our previous home. It always fell over. There was the decorating of the tree, and the redecorating of the tree after TBG picks it up off of me. The answer was to anchor the tree in the corner to the hinge of the front door we never used. We simply had to find another solution for this house.

Three days later, when TBG had finally cooled down enough to discuss the “tree situation”, and I had purchased the replacement ornaments, and it was certain that the floor wasn’t ruined – just really clean; we tried decorating 2.0. And counter balanced with a tractor weight wrapped like a gift. 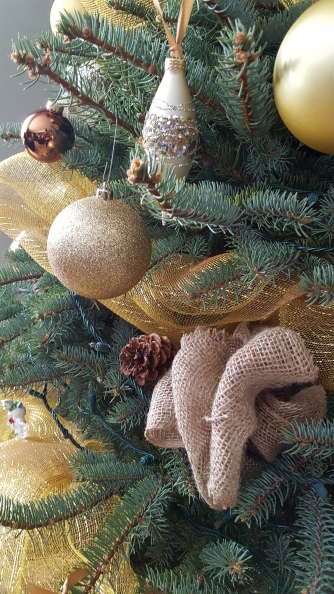 Some families have traditions of eating certain foods at Christmas. Some have specific songs they always play. We have a collapsing Christmas Tree.

Hope your Holidays were magical, and dry…..

One thought on “Without Tradition, We Have Nothing”