Days after our spectacular Christmas tree fiasco, we found ourselves the day before Christmas Eve Day. That’s an awkward way of saying Dec. 23. Second Born Son was at work because it’s high season in the grocery business, First Born Son was in the kitchen cleaning up some dishes. (Yes, that was my Christmas Miracle!)

Me and The Big Guy? We were in the living room discussing decoration placement for the rest of the room, since the tree was the only thing that was completed. You could say we left things a little 11th hour this year.

FBS calls me to the kitchen repeatedly, quickly, and I can tell by the tone, that we have a problem. He points at the sliding glass doors off the kitchen where Cane is anxiously looking to come in. He has his left paw up in the air and there’s enough blood in the snow on the deck for transfusion.

We let him in the kitchen to inspect the damage, and the hemorrhaging continued inside. The same towels that mopped up water the week before, were now used to mop up blood. Once we got his heart rate down, the bleeding did subside and we were able to determine the source of the injury. It was the outside pad of his left paw. A clean slice on an angle that ran so deep you could see parts of the pad I’m fairly certain were never meant to be exposed.

Thankfully, and due to our history with Cane and Roman, we have a fully stocked First Aid kit just for the dogs. We managed to clean things up and wrap it. This was now around 9 p.m. and TBG and I decided to call the vet clinic rather than throw him in the truck for 45 minute drive. After the phone consult it was scheduled to take him in the morning when we wouldn’t have to pay double the rate. After all, once Cane was wrapped, he told us he was ready for bed, thankyouverymuch!

The morning visit confirmed what we feared; that you can’t stitch a pad, and this was going to be a long healing process for Cane. 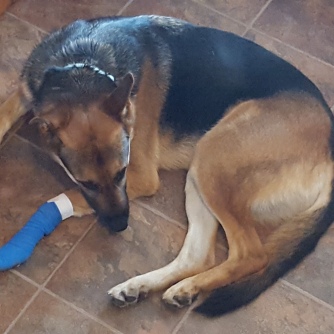 This made for a “fun” Christmas season; trying to keep a large dog inside and inactive while entertaining family.

<PAUSE> Cane was a model patient at the vet clinic. For a large, large-breed dog, he’s remarkably gentle, especially when he knows you are trying to help him. No snarls, no snapping, just one little whimper when they cleaned out the cut. <PLAY>

Christmas came and went and with it some interesting family interaction. Now folks, I can’t get into too much of what I’m referencing here, because honestly, I don’t need a law suit right now, but believe me when I say statements were made by certain individuals that were cause for “shock and awe-ful reactions!” Gotta love the holidays! I’m setting money aside for counselling for the boys!

This was followed up by an opportunity to educate my father in law, whose understanding of burning garbage over the years at the family farm, needed some updating now that he lives in town. We are hoping our neighbours are still speaking to us after learning what he was trying to dispose of in our light paper burning barrel. I’m fairly certain the black smoke billowing from our property was visible from space.

It was that day, just after lunch, that FBS made his declaration.

“We need to have our own reality show!”

“We’re pretty boring, bud. I don’t think anyone would want to watch us,” I chuckled.

Then he made his case. He figured the Christmas tree would be one episode, the dog would be another, and there had been enough crap going on in our world in recent weeks that it would most definitely be enough fodder for a first season. He pointed out we had all the right personalities that would make for good viewing.

“After all, if that family can have their own show, and it’s all written for them…our stuff is real!” I thought he meant Duck Dynasty. He actually meant Keeping Up With The Kardashians.

I reflected on this comment later in the afternoon and chuckled to myself. I think I’ve grown used to the “crazy” to the point that it’s become our “normal”.

After all, we have had a much drama as anything on TV. My father goes in for high risk surgery on a Friday, which takes much longer than estimated, but he survives. The next morning TBG’s mother passes away. SBS breaks his arm TWICE. The same arm – a year apart. We buy a new house, TBG gets a great job offer a month later, which he takes, and the following week I’m laid off of my job.  My mother and my sister move THE SAME WEEKEND – then my father in law moves a month and a half later! We decide to go on our first family vacation in 8 years and our furnace is condemned a week before we leave. Oh, did mention this is in NOVEMBER?

Maybe the kid is on to something!

I can recall catching up with a friend a couple of years ago, and she was stunned with the collection of events.

“If I didn’t know you, I would think you were making this up!” she stated in awe. It wasn’t a compliment.

I’m going to keep his little suggestion in my back pocket, for the next mini crisis. I’ll grab my cell to record while I’m juggling the chaos!